The fire damaged two neighboring three-deckers and sent thick smoke into the night sky above the small strip of houses that runs behind Shrewsbury Street. 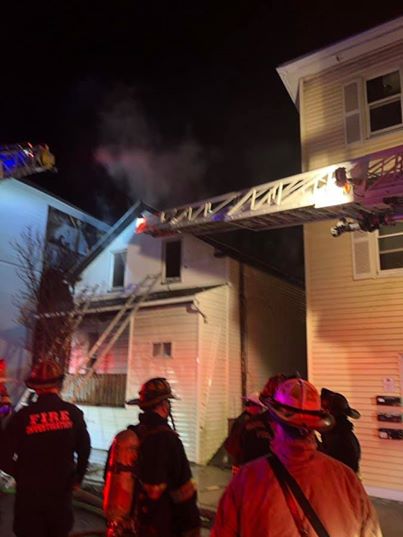 Deputy Chief Martin Dyer said the fire appeared to have started in the basement and worked its way up through the house. Neighbors said the house was abandoned; the deputy chief said investigators were trying to confirm that Monday night.

The chief said firefighters encountered heavy fire when they arrived just after 11 p.m., and took quick steps to protect the surrounding houses. He said Group 3 quickly struck additional alarms to get more firefighters and equipment to the fire.

At one point firefighters were ordered out of the building on both their radios and with evacuation sirens that blared from the trucks. Dyer said the incident commander ordered a “reset” of the firefighting operation, and switched to an exterior attack. Kneewalls used in the home’s construction were preventing access to some of the hot spots, Dyer said. He said the evacuation horns, air horns, and radio calls are all intended to make sure there’s no misunderstanding, and that everyone gets out of the building.

Fire escaped through the roof as firefighters exited the home, and poured water on it from the exterior. Smoke billowed out and firefighters were able to get back in the building and bring the fire under control and overhaul the interior of the house.