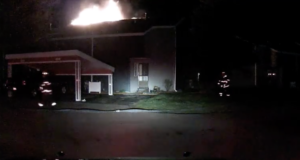 All of the occupants escaped unhurt.

Four of the units were destroyed but firefighters were able to save the other two. Firefighters battled flames several hours before bringing it under control.

The building is south of Five Mile Road, west of East Beltline Avenue.