Protesters shut down a major highway in Atlanta on Saturday and set fire to a restaurant where a black man was shot by police.

Twenty seven-year-old Rayshard Brooks was shot by the police as he tried to escape arrest at the Wendy’s. The incident was caught on camera. 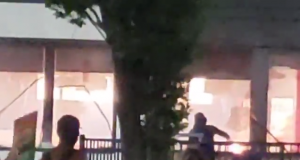 Images on local television showed the restaurant in flames, with no fire crews on the scene. Other demonstrators marched onto Interstate-75, where they were met by police.

Brooks was the father of a young daughter who was celebrating her birthday on Saturday, his lawyers said. His death from a police bullet came after more than two weeks of demonstrations in major cities across the United States in the name of George Floyd, a 46-year-old black man who died on May 25 under the knee of a Minneapolis police officer.

Police were called to the Wendy’s over reports that Brooks had fallen asleep in the drive-thru line. Officers attempted to take him into custody after he failed a field sobriety test, according to the Georgia Bureau of Investigation.

Video shot by a bystander captures Brooks struggling with two officers on the ground outside the Wendy’s before breaking free and running across the parking lot with what appears to be a police TASER in his hand.

Anti-racism protesters on Saturday sought to call attention to the death of another black man – who was found hanging from a tree in California.

Hundreds of people marched in Palmdale to demand an investigation into the death of Robert Fuller, 24. They marched from where the body was found to a sheriff’s station, with many carrying signs that said “Justice for Robert Fuller”.

Authorities said the death appeared to be a suicide, but an autopsy was planned. The city said there were no outdoor cameras that could have recorded what happened.

The Atlanta police chief, meanwhile, resigned on Saturday over the incident outside Wendy’s. By Saturday evening, Atlanta Mayor Keisha Lance Bottoms announced that she had accepted the resignation of Police Chief Erika Shields.