Police in the Czech Republic are investigating a fire that killed 11 people, including three children.

Saturday's blaze, in a block of flats in the north-eastern town of Bohumin, has been described as the worst fire in the country's history.

Six people died in the blaze and another five were killed after jumping from an 11th floor balcony in an attempt to escape the flames.

Ten people, including two firemen and a police officer, were injured. 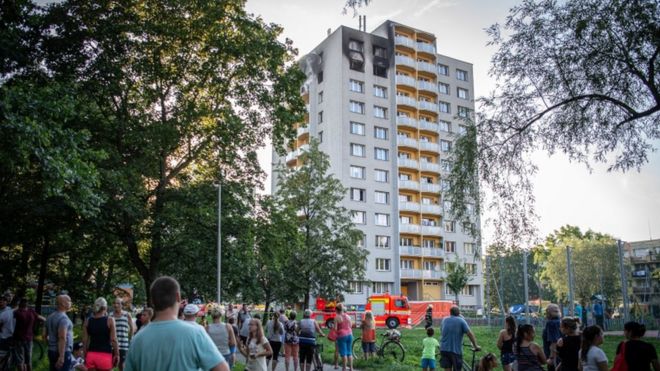 Bohumin is on the Czech-Polish border, some 300km (190 miles) east of the capital, Prague.

The governor of the Moravia-Silesia region Ivo Vondrak said the fire appeared to have been started deliberately.

According to eyewitness reports, a man was handcuffed at the scene after calmly admitting to police he had started the blaze.

Police refused to comment on those claims but they have confirmed that one person was arrested.

Interior Minister Jan Hamacek later told Czech Radio that what he called "a huge tragedy" appeared to have been the culmination of a long-lasting conflict between neighbours.

"The fire was very quick to develop, which is not normal. A fire like that typically affects one room, but this one hit the entire flat, all the rooms are burnt down"