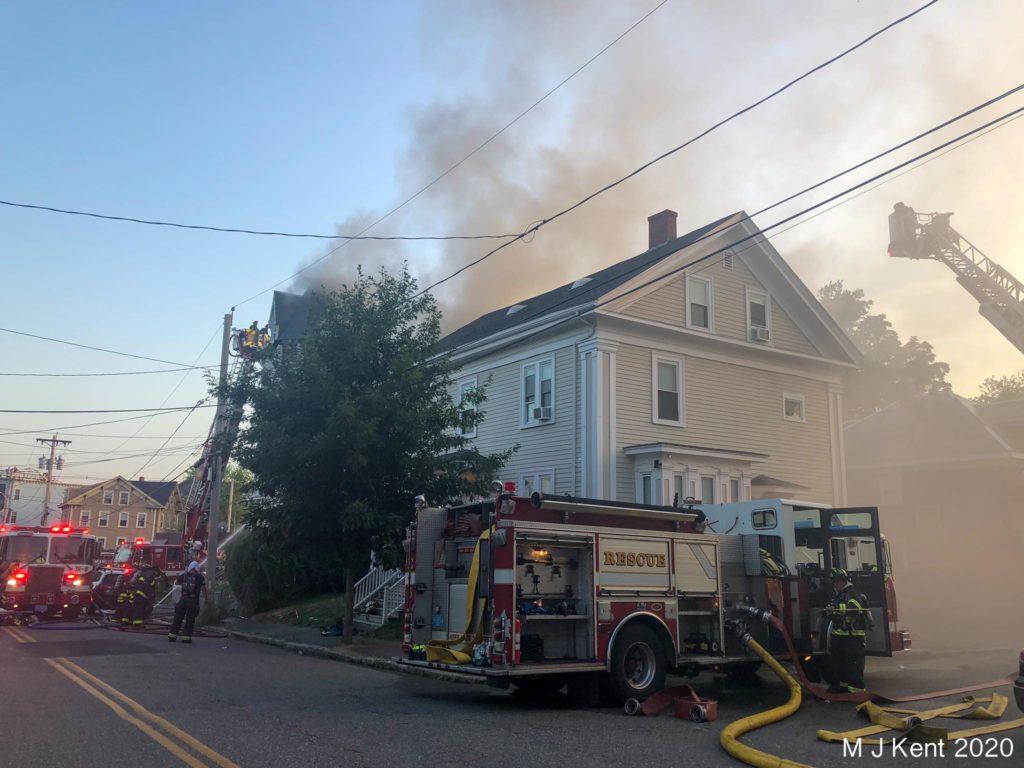 HAVERHILL — About 15 people were able to safely escape a four-apartment Victorian home at 8 Vine St. Tuesday evening after fire broke out in a shed behind the building and spread to the home, fire officials said.
“We believe there were four families in the building and that everyone got out safely,” Fire Chief William Laliberty said.
Firefighters were battling the two-alarm blaze at 7:17 p.m. and by 8 p.m. had brought it under control and were going after hot spots in the home.

Laliberty said it appeared the fire started in a shed just several feet away from the home and traveled up the exterior of the building to the third-floor attic.
He said the Victorian home might have to be demolished due to the extent of the damage to electrical, plumbing and other systems.
“The guys did a great job knocking it (the fire) down, unfortunately it got into the attic,” Laliberty said.

He said firefighters also did a great job keeping the fire from spreading to a neighboring home about 12 feet away and also from spreading to a big barn about four feet away. Both buildings were a concern as was another home located 15 to 20 feet away, he said.
Just before 9 p.m., Laliberty said an investigation into the cause of the fire was about to begin.

He said he did notice a number of trash bins in the shed, but did not know what else was being stored there.
“We still have to talk to some more people,” he said in reference to what was in the shed that might have sparked the blaze.

Laliberty referred to the building as the “old Donovan house” in reference to a retired Haverhill police officer who once lived there.
Police posted a message on Facebook about 7 p.m. Tuesday noting that they were assisting the Fire Department at the scene of a working shed fire on Vine Street and that many streets in the area had been closed, including Winter Street between White and Welcome streets.

Fire departments from Lawrence, Methuen, Andover, North Andover, Groveland and Salem, New Hampshire provided mutual aid at the scene or to cover fire stations
At 9:30 p.m., Deb Duxbury, director of emergency and volunteer services for the American Red Cross, said her team had contacted the four displaced families by phone and was making plans to provide each family with credit cards to use for food, clothing and lodging. Each family member would also be provided with a hygiene kit while children would be given stuffed animals to hold onto during this traumatic period.

“Emergency response at this time is being done over the phone, but it’s everything we used to do only it’s done differently because of COVID-19, Duxbury said. “Once we open a case, a runner meets the clients while adhering to social distancing and wearing masks to provide them with assistance, including replacing any lost medication. And we follow up the next morning with referrals to other agencies that can assist these families in moving forward.”

According to city assessor records, the home was built around 1890 and has four apartment units and a total of 16 rooms. The home is known for its Victorian-style spire, which sits atop the third floor.
Vine Street is an inner-city area just north of downtown and at the southern edge of the Acre neighborhood.