Multiple fire departments were called to the scene of a structure fire Thursday afternoon in the town of German Flatts after a young neighbor saw smoke coming from the house on Old Forge Road.

A call came in from a neighbor around 12:15 p.m., said Deputy Chief Chaplain Ken Palmer of the Mohawk Fire Department. 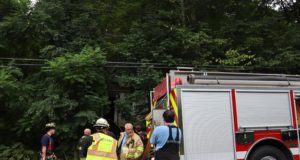 Renee Whitton, 16, said she had just come home around noon when saw smoke.

“I got closer to investigate and I saw smoke coming up from the chimney,” she said.

Whitton said she told her mother, who called 911. Seeing a car in the driveway, they feared someone was inside initially, but no one was home at the time, she said.

The house sustained water damage to the first floor as well as smoke damage to the second floor and attic, said Lt. Josh Wellington of the Mohawk Fire Department.

A cause has not yet been determined, Palmer said.