About 6,000 chickens have been killed in a fire at a farm in County Tyrone. 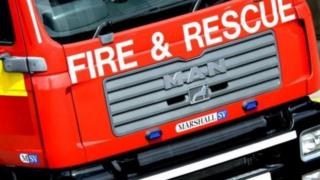 Firefighters were called to the blaze in a large farm shed in Crosscavanagh Road, Dungannon, at about 22:35 BST on Sunday.

Eight appliances from fire stations in Dungannon, Pomeroy, Cookstown, Portadown, Lisburn and Dungiven were sent, including an aerial appliance.

Crews battled the flames for several hours and it is believed the fire started accidentally.

"Approximately 6,000 chickens were killed in the incident.

"The cause of the fire is believed to have been accidental ignition and the incident was dealt with by 02:33 on Monday."