A large fire has broken out in an industrial building and people have been evacuated from the nearby area. 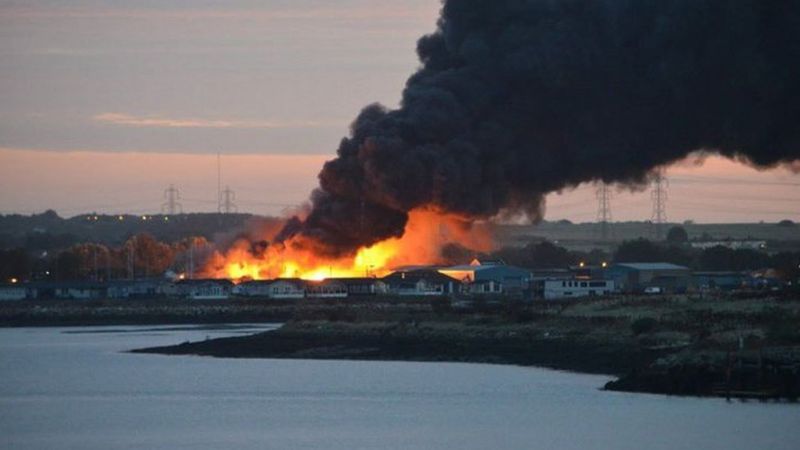 One resident of Hoo Marina, close to the blaze on Vicarage Lane, described hearing a "huge explosion" and an eyewitness said the "place shook".
Kent Fire and Rescue Service said about 200 people were removed from the area and advised others to keep windows and doors closed.
Crews are to stay at the site overnight after the blaze started at 04:40 BST.
The flames could be seen from miles around, but no-one was injured.
Investigators are yet to establish how the fire started. 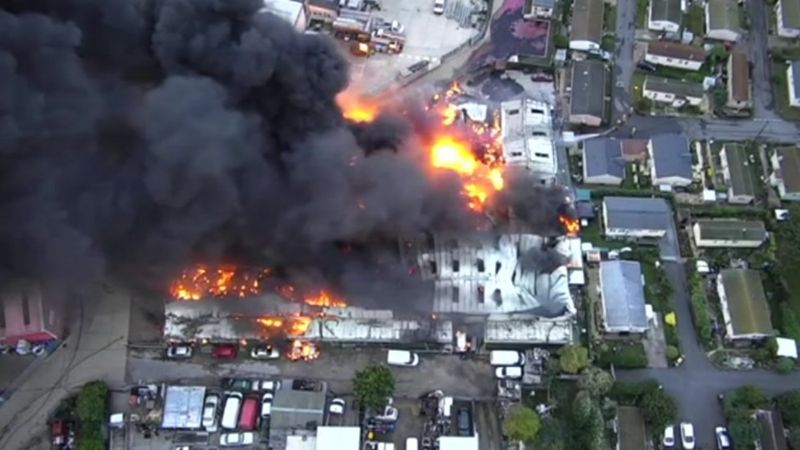 Mark Woodward, the incident commander for the fire service, said the building was used to store animal welfare equipment and some Liquefied Petroleum Gas (LPG) cylinders had exploded in the blaze.
Another eyewitness told BBC Radio Kent he heard "two massive bangs" at about 05:00.
"We thought it was a thunderbolt because the whole place shook," he said.
"All I could see in the background was a red ball of fire and we were all told to evacuate."

Mr Woodward said the blaze had been "well contained" and the fire service was "considering how best to extinguish it".
At its height, 10 fire engines were tackling the flames, and a 200 metre cordon was in place.
UK Power Networks confirmed it sent engineers to the area at 10:00 after receiving reports of an interruption to power supplies to 13 properties.
The power supply to 40 customers was also cut as work continued to reconnect supplies, the company said.
A spokeswoman said the fire had damaged an overhead power cable.
Roads in the area were closed off by Medway Council while emergency teams dealt with the blaze


Many residents were sent to the Village Institute in Hoo, where an emergency rest centre was set up.
Chris Hosegood said the fire had been intense.
"As we walked up Vicarage Lane we looked back and saw the black smoke and all of a sudden the big fireballs.
"We could feel the heat half way up the lane," she said.
At 18:30 BST three fire engines were still at the scene, with firefighters saying they would remain for another one or two days.
Most residents have been allowed to return home.