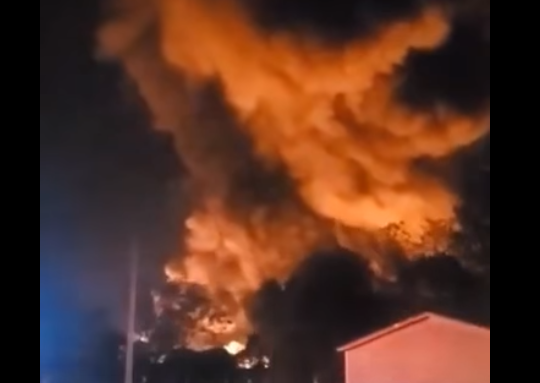 Noah Feit
The State (Columbia, S.C.)
Firefighters battled an overnight fire in Sumter that was so large it could be seen on satellite images.
Hours after it was first reported, the fire is considered contained, but is not expected to be fully extinguished for days or even a week, Sumter Fire Department Division Chief Joey Duggan told The State Wednesday.The fire broke out at a building on South Lafayette Drive and Fulton Street, according to the Sumter Police Department. That’s near Manning Avenue in an industrial section of Sumter.

Officials said the fire started at about 10 p.m. Tuesday at the former V B Williams Furniture Plant, which closed in 2004, the Sumter Item reported. The building is now occupied by Hodge Trucking Company, and used as a recycling warehouse, according to Duggan.“There was heavy fire in the facility, and we issued an ‘all call’ for for firefighters to respond,” Duggan said. “It still continues to burn. We’ve got it contained pretty well, and it’s under control, but we’ll be here for days putting water on it and looking for hot spots.”
Roads surrounding the massive building fire have been closed, and police are asking drivers to avoid the area.Duggan estimated the size of the warehouse is about 500,000 square feet, and said at least 300,000 were burning. Items inside the building — including plastics, tires, rags and other cloth materials — likely contributed to the rapid spread of the fire, according to Duggan.
“It burned significantly hot, significantly fast,” Duggan said.
Information on what caused the fire was not available and remains under investigation.Both the Columbia Fire Department and crews from nearby Shaw Air Force Base assisted in battling the fire, and as many as 130 firefighters have been on the scene, according to Duggan.
The building was closed when the fire broke out an no injuries have been reported, Duggan said.
That included the firefighters, who have not entered the building as of 8 a.m. Because of the nature of the blaze, Duggan said crews have had to battle the fire externally and are using lots of water to control the flames that caused walls to collapse and part of the roof to be burned off.The National Weather Service office in Columbia said the fire had to be very large to appear as it did on satellite images.“The smoke plume from the fire is clearly visible,” the National Weather Service tweeted.