A three-alarm fire at a church in south Modesto on Saturday afternoon displaced 10 people who were living in its residential portion, according to officials.

Jeff Serpa, battalion chief with the Ceres Fire Department, said crews were called to the scene at 1102 Leo Ave. just after 3 p.m. on a report of a working structure fire. 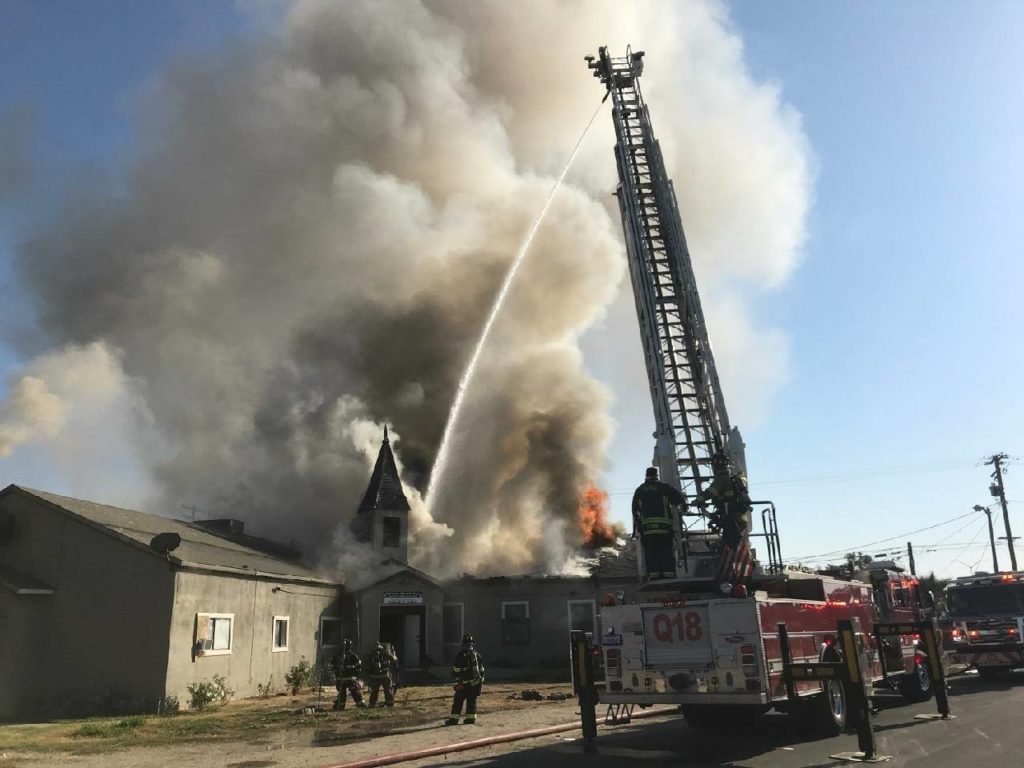 When crews arrived, they found fire and heavy smoke coming from inside the church, located about a block south of Sam Avenue

They initially went inside to conduct an “aggressive interior attack,” Serpa said. The fire was in the attic, and with difficulty accessing it and the blaze spreading, crews exited the church and fought from the outside.

By that time, they already had made sure there were no occupants inside, and ensured that all fire personnel were safe.

Serpa said the building is “untenable at this time.” All or most of the roof is gone and there is fire damage throughout the building. He called it a total loss.

A look inside the doors Sunday morning showed large parts of the church building gutted by fire, but bits here and there untouched, including a loaf of bread and other groceries in a kitchen area, and a glass case full of tubs of snack foods.

Serpa said in addition to the difficulty accessing the fire, there were water supply problems because nearby hydrants and-or valves were turned off. Water tenders from the Hughson and Woodland fire districts were called in.

Firefighters from Ceres, Modesto, Turlock and the Stanislaus Consolidated Fire Protection District were on scene.

The American Red Cross assisted the five adults and five children living at the church. The Ceres Fire Department also helped with a $250 “safe” card provided by the California Professional Firefighters to help families, Serpa said.

A sign on the front of the church identifies is at Iglesia Apostolica de la fe en Cristo Jesus USA. An attempt by The Bee to reach the pastor by phone Sunday morning was unsuccessful.

Serpa said he believes the church was active. It had power from the Turlock Irrigation District at the time of the fire, whose origin and cause are under investigation.