A dozen people, including five firefighters, were injured early Thursday after a fire tore through an Upper West Side apartment, according to officials and reports. 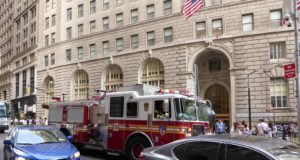 The blaze erupted inside an empty Riverside Drive apartment near W. 82nd St. around 5:45 a.m. and quickly spread to adjoining apartments, the FDNY said.

Firefighters were seen pulling people out of a third-story window onto a tower ladder and down to safety.

There was no one in the home where the fire started, officials at the scene said. The flames were put out around 7:15 a.m.

Seven residents and five firefighters were taken to area hospitals, all with minor injuries.