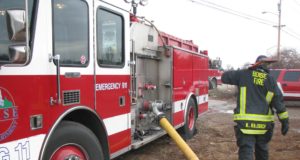 At 4:02 a.m., Boise Fire Department crews were called to a two-alarm fire at Cottonwood Suites on the 3000 block of West Main Street, according to tweets from the fire department

While fighting the fire, crews rescued 11 people from a third-floor balcony. Nine of those rescued were evaluated by medics at the scene of the fire, but no one was taken to the hospital.

One firefighter suffered a minor injury during the fire, though the Boise Fire Department did not state what the injury was in a tweet.

The fire department said later that the fire began in a locked laundry room. Investigators were unsure of further details, but BFD said in a tweet that it might have been an electrical issue.

It was not immediately clear to what extent of the hotel was damaged.