Nov. 27—A man was arrested around noon Wednesday on investigation of arson after a couch was set on fire in a sixth-floor room at the Red Lion Hotel in Renton, according to the Renton Police Department. Since April, the hotel has provided shelter to more than 200 people who are homeless in an effort to thin out crowded shelters and protect people from the spread of COVID-19 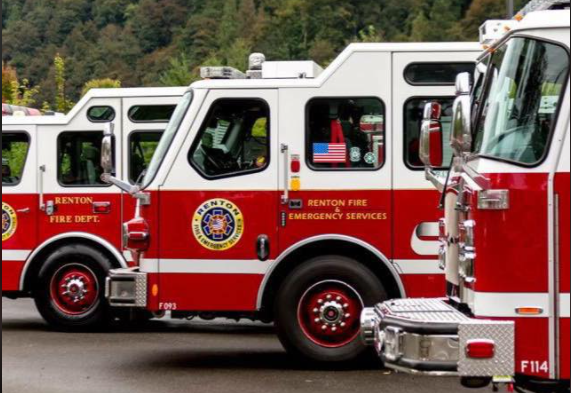 Renton fire crews responded to the fire and said a sprinkler system helped to contain the flames. The building’s residents were evacuated, a process made difficult since many have physical and mental disabilities, but no injuries were reported, the Associated Press reported.

Six rooms on the fifth and sixth floors sustained significant water and smoke damage and people staying in those rooms were moved to different rooms at the hotel.
Witnesses told police a 46-year-old man who had lived at the hotel for three weeks became upset with staff members and told staff, “I’m going to burn this place down,” Renton police Cmdr. Dave Leibman wrote in a Thursday news release. The preliminary arson investigation indicated the fire started on a couch, the news release says.

The man locked himself in his room and hotel staff called a locksmith for help, Leibman wrote. The locksmith and staff members approached the room and encountered thick smoke; the locksmith tried to enter the room with a fire extinguisher but was held back by the heat and smoke, Leibman said in the news release.

Eventually, the man made his way outside, where he was arrested after bystanders pointed him out to responding officers, says the release.

The Renton hotel has primarily housed people who were previously staying at the Downtown Emergency Service Center’s Morrison Hotel shelter in Seattle. Many of those served by this shelter have disabilities, serious mental illness or substance use disorders, according to previous reporting by The Seattle Times.

King County is currently paying for the hotel, along with three other hotels in the region, to house those who are homeless. The county spends close to $2 million per month for use of the hotels, according to Sherry Hamilton, spokesperson for the King County Department of Community and Human Services.

Early into the county’s use of the Red Lion Hotel, Renton city officials started pushing back. In May, Renton leaders publicly asked King County to move people living at the hotel out by July, citing a large increase in 911 calls.

According to earlier reporting by The Seattle Times, Renton police Chief Ed VanValey told the King County Council in early May that there had been a 79% increase in calls from the hotel’s location — sometimes nine to 12 calls in a single day. Renton Regional Fire Authority Chief Rick Marshall told the council the fire department fielded 30 calls in April, whereas over the same period last year it fielded one.

This week, Renton city officials rushed forward legislation that would set a six-month move-out date at the Red Lion. Renton City Council could vote the legislation into law as early as next week, when it comes up for a first reading.