A federal grand jury on Tuesday indicted the captain of the Conception dive boat on 34 counts of seaman’s manslaughter, accusing him of not implementing adequate safety protocols before the boat caught fire off the coast of Southern California last year, trapping and killing all of its passengers and one crew member. 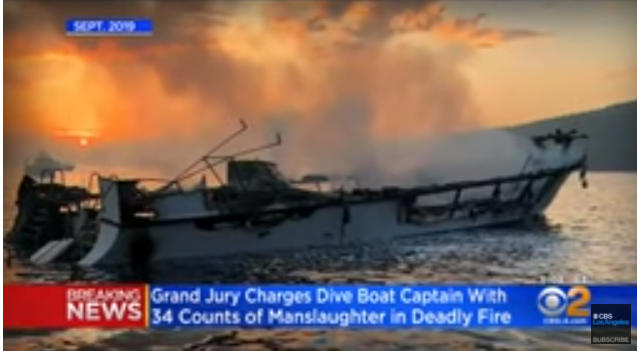 The Sept. 2, 2019 tragedy was one of the deadliest maritime disasters in modern American history. Several of the boat’s 33 passengers were from the Bay Area and Santa Cruz. They, along with one crew member, were asleep below the deck of the Conception when the pre-dawn blaze began.

The captain, Jerry Boylan of Santa Barbara, survived, along with four other crew members.

“As a result of the alleged failures of Captain Boylan to follow well-established safety rules, a pleasant holiday dive trip turned into a hellish nightmare as passengers and one crew member found themselves trapped in a fiery bunkroom with no means of escape,” U.S. Attorney Nick Hanna of said in a statement. “The loss of life that day will forever impact the families of the 34 victims.”

Each of the 34 manslaughter counts carries a maximum 10-year prison sentence. 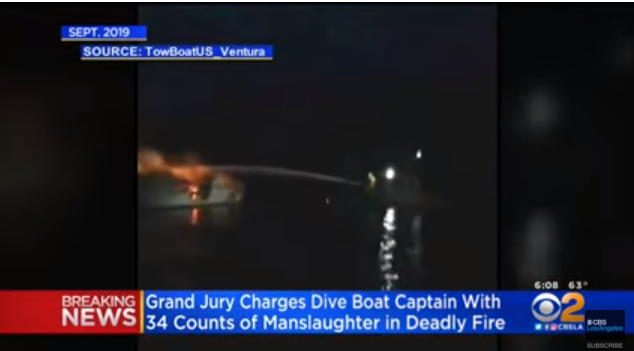 An investigation by the National Transportation Safety Board did not find a definitive cause of the fire, but officials said they believed it began toward the back of the main deck salon, where divers had plugged in several electronic devices and items with potentially combustible lithium ion batteries.

During an October hearing, the NTSB faulted the disaster on Boylan and the vessel’s owner, Truth Aquatics. Investigators told the NTSB that some of the recovered bodies were wearing shoes, indicating they tried escaping the blaze. Both exits in the below-deck bunkroom were blocked by flames; a coroner determined that all 34 died of smoke inhalation.

Surviving crew members, in interviews released by the NTSB in September, detailed their vain efforts to save some of the passengers. Boylan radioed a “mayday” distress signal from the ship’s wheelhouse at 3:14 a.m., which ended with him saying he could not breathe, before abandoning the ship, according to the NTSB’s findings.

Milton French, one of the Conception’s deckhands, told investigators he frantically tried reaching those in the lower decks. French said he knew there was scuba gear at the back of the boat that he could use to breathe during a rescue attempt.

But he said Boylan, the captain, told him to get into a lifeboat.

“So I turned to him and asked him, like, ‘How do I get into the bunk-room? Just tell me how.’ I’m like pleading with him to tell me like the f— magical solution here because I wasn’t finding one,” French told investigators. “And he just kept saying, ‘We can’t, we can’t.’”

“I’m like, no, that’s not the answer,” French said. “You’ve got to f— tell me how. And he just, ‘We got to get in the skiff; we got to get out of here.’ And I just looked around again, and was just like helpless.”

Crew members told investigators they did not hear screaming or banging below the deck.

Hanna said federal investigators informed Boylan, 67, and his lawyer about the indictment after it was filed. He’s expected to surrender to authorities in the coming weeks.