Dec. 3—A wind-driven wildfire in Silverado Canyon that destroyed homes and forced at least 25,000 residents to evacuate exploded to more than 6,400 acres on Thursday and injured two firefighters. 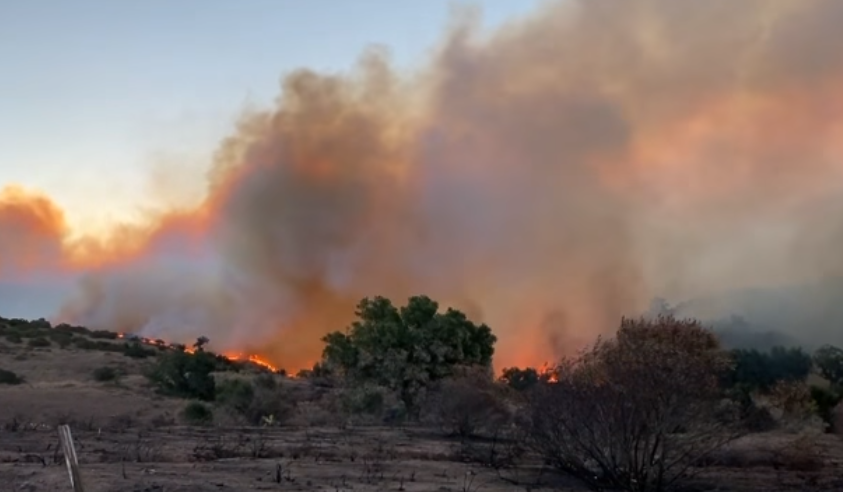 Hundreds of firefighters from more than 30 agencies battled the growing blaze as authorities worked to tally how many buildings were damaged or lost.

Gusty Santa Ana winds spread the flames from a house fire Wednesday night into nearby vegetation. On Thursday night, the fire was 10% contained.

The fire started at around 10:15 p.m. Wednesday at a house in the 29000 block of Silverado Canyon Road, Fire Authority spokeswoman Colleen Windsor said. However, a Canyon resident and the name of the fire suggests it began on a smaller street in the neighborhood called Bond Way. 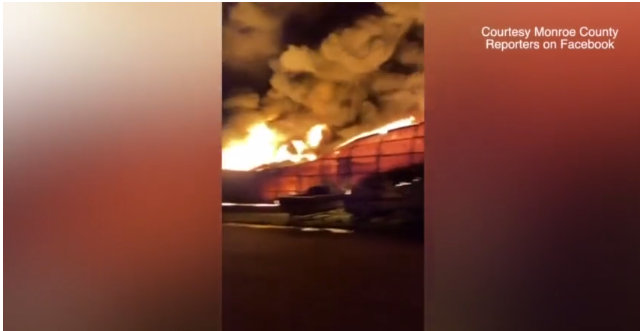 Fire authorities have not clarified exactly where the fire began. They did not say how the house fire started.

“We know that a number of houses have been damaged, potentially destroyed,” OCFA Chief Brian Fennessy said at a news conference Thursday afternoon. “They’re being assessed right now.”

Fennessy said two firefighters were injured during the blaze.

“My understanding is that they were treated on scene and transported to a local hospital,” he said, adding that their conditions were unknown.

He did not go into details about how they became injured. Cleveland National Forest officials shared on Twitter that the firefighters work for the Forest Service.

Dr. Scott Weldy, a wildlife veterinarian, got word early Thursday morning that more than 100 animals that live at the OC Zoo just across the 241 Toll Road from Irvine Lake would need to be evacuated from the path of the fire.

Among the animals were two bears, two mountain lions, some burros and two raccoons that had to be sedated for the move.

In about a two-hour window, Weldy, who operates the Serrano Animal & Bird Hospital in Lake Forest, some of his veterinary team and staff and volunteers from the zoo got the animals ready for transport.

“The zookeepers are well-trained and have been rehearsing the moves,” Weldy said. “Some of the animals turned to go into their cages stress-free. They’ve been practicing that every day and it’s proven to be beneficial.”

All the animals were moved into cages at the Santa Ana Zoo.

Fire helicopters and a helitanker fought Wednesday night along with ground crews, but by 1 a.m. the Bond fire had charred more than 1,000 acres and kept growing.

“There is a lot of fuel out there,” OCFA Capt. Thang Nguyen said. “We’re dealing with the wind, and we have really low relative humidity.”

Air attacks were stopped overnight because of the wind but continued Thursday. Firefighters from Los Angeles and Ventura counties helped.

A large helitanker capable of dropping 3,000 gallons of water that is working in the region this season to fight fires is also responding.

“The wind erratically changes directions, so that’s the dangerous part about it,” Nguyen said.

Santiago Canyon Road, from Jackson Ranch Road to the 241 Toll Road, was closed and authorities asked people to stay clear of the area.

“You’re strongly encouraged to seek safety with family/friends or in a hotel,” the agency said on Twitter to those facing evacuations. “Due to COVID-19, no congregate shelter is offered.”

Joanne Hubble, who has long been a source of natural-disaster preparation in the canyons, jumped into action once again.

It was close to 3 a.m. when she ran along her street deep in Harding Canyon, near Modjeska Canyon, knocking on neighbors’ doors telling them to evacuate.

“Because we had the power shut off, we couldn’t call or email them,” Hubble said. “Everybody was rushing to get out.”

Hubble had been up during the night listening to a radio scanner, updating neighbors via email until the power went out.

When the mandatory evacuations were ordered, she grabbed a few clothes, got her dogs and had someone come in for her horse.

“When I left the canyon, I saw the ridge between Modjeska and Jackson Ranch on fire,” she said. “It was pretty bad.”

Though the OCFA has not said how many homes and buildings were damaged or burned, Hubble said she counted four homes and one trailer that were all next to each other were lost to the fire in the Williams Canyon area.

The property owners were either out of town or places were vacant when the fire raced along the hillside and consumed them, Hubble said. The trailer belonged to her friend, and one of the homes that burned was owned by the son of one of Hubble’s friends.

‘It was just black’

Diane Young recalled fleeing late Wednesday evening from her home, with its log cabin facade, tucked into one of Silverado Canyon’s many wooded groves.

On Wednesday night, Orange County Sheriff’s deputies raced through the canyon, yelling from loudspeakers for residents to get out. The Bond fire was on its way.

Young, 74, a 46-year canyon resident, didn’t leave immediately. She checked the weather — winds gusts battering the area had fallen to 11 miles per hour. But then Edison turned off the power.

So Young packed up her necessities and loaded into the van with her dog and three cats and they set off.

Flames covered the canyon walls, and the area was saturated with thick black smoke. Fires had menaced the canyon community before, but never this close.

She ended up in the parking lot of Santiago Canyon College a few miles away where on Thursday she recalled the frightening exit. As she spoke from the driver’s seat of her old van parked in the parking lot, the fire was still sending up a massive plume of grayish-white smoke behind her far to the east.

“It was just black,” Young said. She stared off, tears welling in her eyes. “And that white ash covering everything.”

Her small dog Freddy sat sleepily in the passenger seat beside her, never once picking up his head. “They say he’s 14-years-old,” Young said.

The Red Cross set up a temporary evacuation point at the college, at 8045 E. Chapman Ave. in Orange. In-person classes were canceled because of the blaze and high winds. The parking lot was bustling for much of the day.

Red Cross volunteers and county social workers set up a waystation for tired evacuees there. They walked between about a dozen cars, asking how they could help.

The volunteers said they had processed at least 100 cars throughout the day. Most people needed a place to stay, so the volunteers connected them with hotels with open rooms. At one point, about 60 to 65 were placed in rooms.

Thursday proved busier than most days in previous fires, volunteers said. The fire brushing closer to homes pushed out a lot more people.

Bruce McDougal has lived in the canyon since 1992. He built his home. He stayed with his daughter and their dog all night, watching flames creep toward his property, dousing them with his hose when they got too close.

Fire crews put out the fires on the hillside, but the fire line came right up to the walls of his house. An old car burned up in his driveway.

This was not his first fire. Many who come to live in the canyon seeking open spaces and proximity to nature find out fires are a fact of life here.

David Pedersen, 55, moved with his wife and daughter to Silverado Canyon just six months ago. This is their second fire in that time.

They watched as the fire spread from around a home at the mouth of the canyon. When the fire grew and emergency vehicles descended on the area, the family packed up and fled with their dog.

Pedersen, an anthropology professor at University of California, San Diego, said they drove by lines of fire trucks idling on the road out of the canyon. He said he was worried whether their home would still be standing when they returned.

He was most worried about the powerful winds this week driving “embers churning in the winds,” and setting more fires when they land.

“The flames they can hose down and stop,” he said. “But the embers, there’s nothing you can really do about those.”

Several school districts announced they would have students stay home Thursday and work from their computers because of the poor air quality from the smoke, possible power outages and employees affected by evacuations.

Fire officials earlier Thursday said the fire was at 7,200 acres, but on Thursday night changed that to 6,400, attributing it to more accurate mapping