21 injured.. two rescued from scaffolding after explosion at Baltimore Gas and Electric building

An explosion at the Baltimore Gas and Electric offices in downtown Baltimore Wednesday morning left left 21 people hospitalized and two workers briefly trapped on dangling scaffolding, the fire department said.
The two workers were rescued through a window. 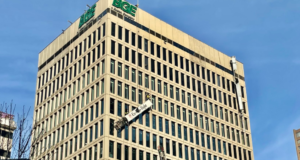 The department responded around 8:30 a.m. to the scene at Lexington and Fayette streets, said spokeswoman Blair Adams at a news conference Wednesday morning. The department said it rescued about 23 people from the building. The explosion caused a fire, and the department said the incident caused a partial roof collapse.

Fire personnel are still combing the building for any additional people. Two buildings on each side of the block were also evacuated as a precaution, Adams said.

The fire department said earlier Wednesday morning that nine people were taken to area hospitals in critical condition, and another was in serious condition. The status of the other 11 victims’ injuries were not immediately provided. Two people declined care, the department said in a tweet.

The incident at Baltimore Gas and Electric’s offices at 2 Center Plaza was related to construction, according to a statement from company spokeswoman Stephanie Anne Weaver. Work on the building’s “air handling and boiler system” likely was the culprit, she said. She said the gas in the building was off due to the construction.

The company also said the building was mostly empty due to the coronavirus pandemic and the upcoming holidays.

Adams said the official cause of the fire is still under investigation.

Niles Ford, the city’s fire chief, said at the news conference the department is trying to “wrap things up” and make sure the situation is “as safe as possible.” The incident ran from the 10th floor to the roof of the building, he said.

Wayne Jackson, 68, said he was in the area when he witnessed commotion. He looked up and was shocked to see the scaffolding hanging from the BGE building.

From the corner of North Charles and Fayette streets, he pointed to a broken window on the high rise building. He said that’s how rescuers retrieved the stranded workers.

”They took them in through the window,” Jackson said. ”Nobody fell, nothing.”

Ford said they brought the contract workers — who were still tethered to wires on the side of the building — inside the building on the 10th and 11th floors to rescue them. The worker brought through the 10th-floor window was able to be pulled through easily, but rescue crews had to climb up the scaffold and cut through the 11th-floor window to bring the other worker in.

Jessica Mazan, 38, was taking her mother to a doctors appointment when firetruck after firetruck rushed by.

Mazan said she saw medics guide one of the workers into the back of the ambulance. She said the responders gave him a blanket, but that she was relieved that the worker seemed to be OK.

Keith Osterman, 38, and Robert Friedel, 58, were working construction in the neighboring building and were just outside when they heard the explosion.

”It was loud and everything around here shook,” Osterman said.

Scared, they looked up, Osterman said. “And then we seen the debris falling, which was the scaffolding and a bunch of glass.”

”A hard hat fell down, so we didn’t know if there was anyone in that lift,” Osterman said.

Osterman and Friedel said just two weeks ago they were putting up windows in the building that exploded — and were thankful, they said, to have been working from the inside.

Asked if there was anything he wanted to add, Friedel said: “Only that you never know.”

In addition to the fire department, Baltimore Police officers and agents from the Bureau of Alcohol, Tobacco, Firearms and Explosives responded to the scene. Mayor Brandon Scott praised the work of the rescue crews.

“Without their bravery and quick response, the outcome could have been much worse,” he said in a statement.