Seven firefighters were injured fighting a massive Queens fire that erupted Friday night inside a nail salon and raged for more than six hours, authorities said. 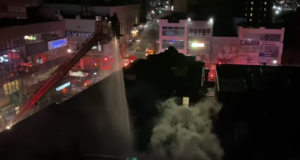 The fire started inside the Eunice Beauty Salon on 37th Ave. near Main St. in Flushing around 11:50 p.m. Friday.

As the blaze grew in intensity, it consumed the entire building and spread to a neighboring property, authorities said.

Videos shared on social media show massive plumes of smoke and flames coming out of the storefront, as firefighters on raised tower ladders pour water from above.

The blaze quickly became a 7-alarm fire, which brought 50 FDNY units and more than 200 firefighters to the scene. A collapse zone was also created to contain any other damage to neighboring buildings.

Seven firefighters were injured fighting the flames. They were all taken to nearby hospitals for treatment.

Most of the fire had been extinguished by about 6:30 a.m., although firefighters were still battling some pockets of fire inside, officials said.

The cause of the fire was still under investigation.