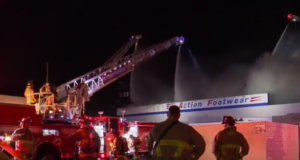 The two other firefighters sustained minor injuries, and medics took all three to UC San Diego Medical Center’s burn unit, according to Chula Vista Fire Department spokeswoman Capt. Linda D’Orsi.
The three-alarm blaze was first reported just after 5:40 p.m. at Action Footwear and Apparel off H Street west of Broadway, D’Orsi said over the phone from the scene. All four employees reportedly escaped the building uninjured
Fire crews from Chula Vista and surrounding agencies, including San Diego and National City crews, were still battling the flames as of 7 p.m.
D’Orsi asked the public to avoid the area.
The captain told OnScene TV the gusty winds “are making things very difficult.” According to the National Weather Service in San Diego, Chula Vista was hit by gusts as strong as 40 mph earlier in the day Monday.
D’Orsi said the fire caused an electrical transformer to explode and brought down power lines. San Diego Gas & Electric did not report any power outages in the area.
At least part of the building’s roof collapsed, D’Orsi said.
“The fire is not close to being under control, because of the winds,” she told OnScene TV around 7 p.m. “We’re trying to just protect the neighboring buildings so that the fire doesn’t spread.”