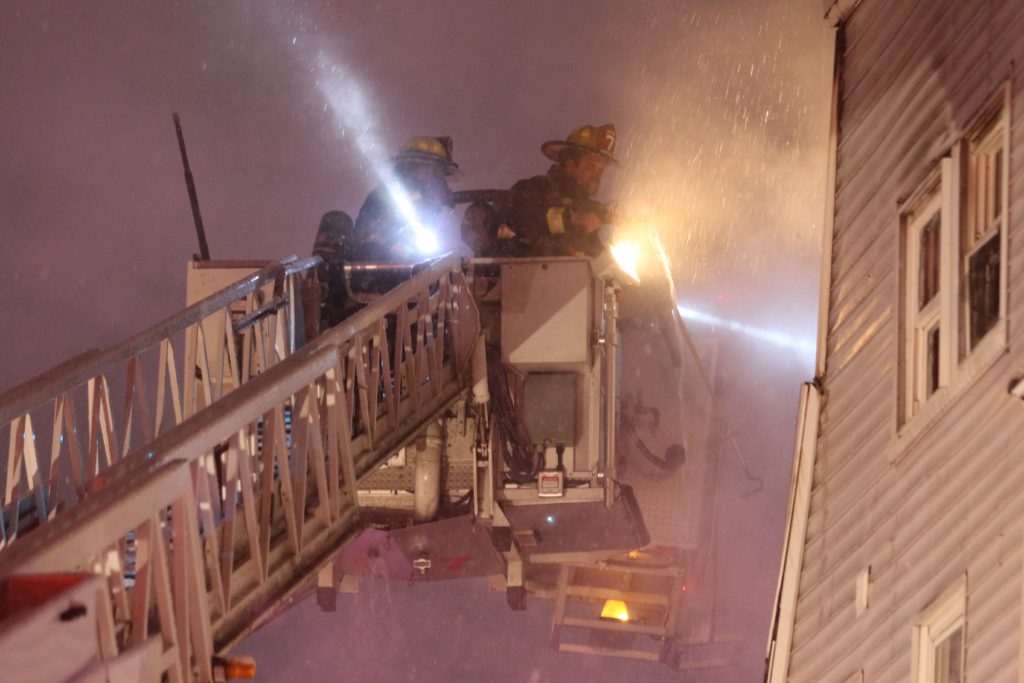 WORCESTER — More than 20 people were displaced and several pets were missing following a three-alarm fire at 69 West St. on Tuesday evening.

Firefighters were called to the multifamily building just after 6:30 p.m., and found heavy fire at the rear and side of the building, Deputy Fire Chief Martin Dyer said.

“Crews quickly controlled the fire on the exterior and made entry to the third floor where there was heavy fire which extended into the attic,” Dyer said.

The fire went to three alarms to bring more resources to the scene as firefighters worked to contain the blaze, Dyer explained.

Nasty weather conditions — steady snow and frigid temperatures — challenged firefighters at the scene and slowed the response of additional manpower.

One firefighter sustained a minor injury to their hand and was being treated at an emergency room while none of the residents of the building were hurt, Dyer said.

Nearby Becker College opened its Boutin Student Center to those who had been displaced.

College spokesperson Amy Dean said none of those displaced were believed to be Becker students.

Dean said the college is part of the community in the area where the fire broke out and wanted to help.

Refreshments were being provided and those who lived at 69 West St. were warming up and staying out of the inclement weather while firefighters worked.

Dean said the Red Cross was also expected to come to assist the residents Tuesday evening.

Dyer said firefighters did an excellent job containing the fire “with a tough building, heavy fire on arrival and difficult weather conditions.”

A fire watch was set up to keep an eye on the building overnight and address any rekindling.

The Worcester Fire Department’s Fire Investigation Unit is working to determine the cause of the blaze.