A fire that ripped through a building on the Ocean City boardwalk Saturday morning caused extensive damage to Playland’s Castaway Cove, an outdoor amusement park.

The Ocean City Fire Department responded to the multi-alarm fire, first reported at 7:40 a.m., on the 1000 block of the boardwalk. 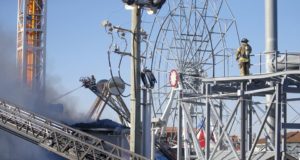 Smoke from the fire could be seen from as far away as Atlantic City. At one point, from the 9th Street bridge, smoke appeared to engulf the entire amusement park. The decorative pirate ship — which was located above the boardwalk entrance of the arcade — was reduced to a skeletal frame.

“To our family and loyal guests, we thank everyone for their thoughts and prayers during this difficult time,” a message on Playland’s Castaway Cove Facebook page stated. “We would like to thank all of the first responders for their hard work and pray for their continued safety throughout today’s events.”

The post also said the amusement facility will rebuild and anticipated being open in the spring.

The fire was deemed under control as of late Saturday morning, but firefighters remained on scene to fully extinguish the blaze. Numerous local fire departments, as well police and rescue squads, responded to the scene.

There were no occupants in the building at the time of the fire, and no fire-related injuries were reported, however first responders were still being assessed for injuries related to the extreme cold.

While there appears to be no structural damage to the boardwalk, further inspection will be required. The cause of the fire at this time is unknown and remains under investigation.

The public is asked to remain clear of the area until the response is over, and full access to the 1000 block of the boardwalk will be restored once conditions allow.