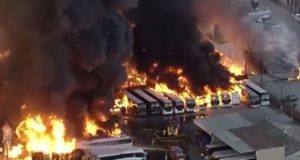 A massive fire erupted in an industrial area of Compton early Friday, engulfing several structures and spreading to a lot where the blaze burned at least a dozen charter and school buses.

The fire broke out near North Santa Fe Avenue and East Weber Avenue just after 4:30 a.m., officials with the Los Angeles County Fire Department said. No injuries have been reported.

Aerial footage on KTLA-TV Channel 5 shows massive plumes of thick black smoke billowing into the air as multiple fire engines sprayed high-powered hoses onto the flames. Several wood pallets and at least 12 buses were on fire.

In addition to fire crews from L.A. County, firefighters from Compton, Santa Fe Springs and Montebello were also battling the blaze. Power outages have been reported in the area.

“It’s a big fire,” firefighter Jonathan Africa with the Montebello Fire Department said. “A bunch of buses were involved that were parked in the lot. They caught on fire, and the structures caught on fire.”

Video also shows residents of nearby apartment buildings evacuating, with one person describing loud booms and another in tears.

The cause of the fire was not immediately clear.

This is a developing story.