Firefighter seriously injured at a 2-alarm fire in Queens residence 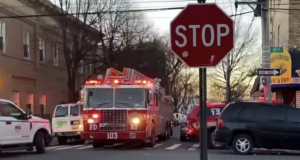 An FDNY firefighter was hospitalized with serious injuries after he suffered a fall as he and his team put out a roaring blaze in a Queens home early Wednesday, officials said.

Two residents suffered minor injuries after the fire erupted inside an apartment on 85th St. near 88th Ave. in Jamaica just after 5 a.m

Firefighters were beating back flames inside the building when the firefighter fell through a window into a small shaft between two buildings, officials said.

Medics and firefighters managed to pull the firefighter from the shaft and rushed him to Long Island Jewish Medical Center, where he was listed in serious but stable condition.

The two residents were taken to the same hospital with minor injuries, officials said.

More than 100 firefighters were called in to put out the blaze, which was brought under control by 6:30 a.m.