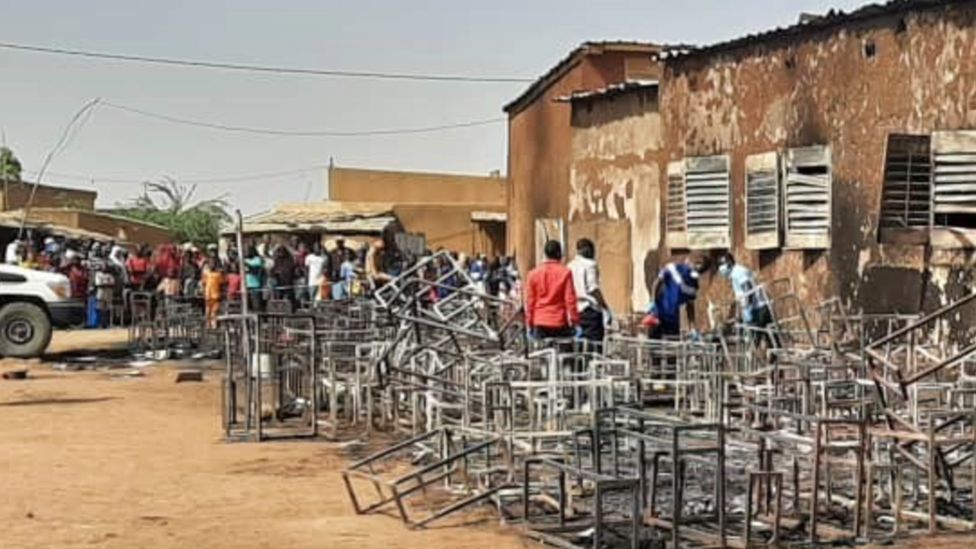 At least 20 children have died after they became trapped in a fire at a school in Niger's capital, Niamey.
It started late on Tuesday afternoon when the children were in lessons, many in straw-hut classrooms.
The flames blocked the school gate, so most pupils had to escape over a wall, said a teacher's union official quoted by Reuters.
Most of those who did not manage to escape were attending the school's nursery, officials say.

BBC Africa Live: Updates from the continent
A quick guide to Niger

The government-run junior and pre-school in the Pays Bas district of the city had a mixture of brick and straw-hut classrooms, BBC Hausa's Tchima Illa Issoufou reports from Niamey.
In total 28 straw classrooms were completely destroyed and some of the school's 30 permanent classrooms were also damaged, she says.
Straw-hut classrooms are often built as overflow areas for lessons in schools when there are not enough brick ones, our reporter says.
A man who lost his six-year-old son in the fire urged the government to construct safe schools for children.
"Let's not put everything in the hands of God, let's not put everything in the hands of the state," he told the BBC.
"We have lost 20 children in a fraction of a second - we must call on the state to say that hut classes should no longer exist anywhere in the country."
Fire service commander Sidi Mohamed told public television that firefighters attended the scene quickly, but "the power of the fire was enormous", the AFP news agency reports.
Parents were waiting at the Pays Bas Primary School on Wednesday morning to find out about arrangements for burying their children, our reporter says.

Muslim burials usually take place within 24 hours of a death.
Teachers' union official Mounkaila Halidou said there were about 800 students attending the school.
"Those who died were mostly in the pre-school," he said.
It is not yet clear what caused the fire.
Niger is the world's poorest nation, according to the UN's development rankings for 189 countries.