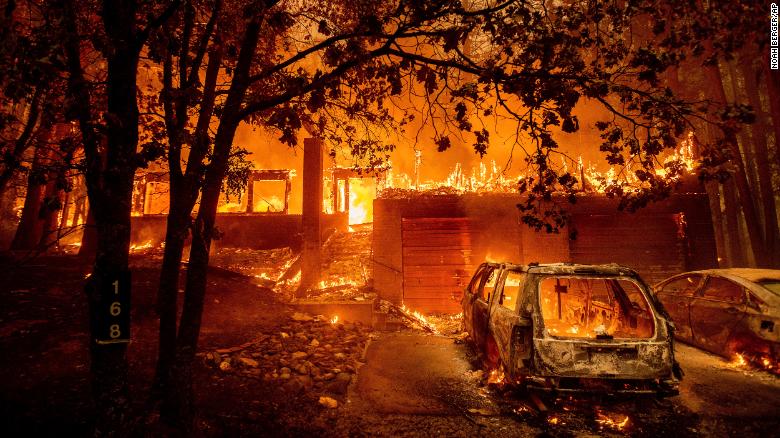 (CNN)- Despite the efforts of firefighters battling the Bootleg Fire, the raging flames of the nation's largest wildfire continued to spread in southern Oregon as officials declared weather warnings in the area.
The fire has scorched 408,930 acres as of Sunday, an expansion of more than 6,000 acres since Friday. The fire is currently 46% contained.
"This fire is resistant to stopping at dozer lines," said Jim Hampton, a fire behavior analyst. "With the critically dry weather and fuels we are experiencing, firefighters are having to constantly re-evaluate their control lines and look for contingency options," he noted in a statement posted on InciWeb, the clearinghouse for wildfire information in the US.


Dry and unstable conditions prompted a Red Flag Warning at the fire's site on Saturday, according to InciWeb. The National Interagency Fire Center (NIFC) said the warning is issued when there is "severe fire weather like strong sustained winds, gusts and low humidity, combined with a high fire danger rating."
Additionally, smoke and haze from other nearby fires lingered Sunday as temperatures remained warmer.
"The smoke is expected to keep temperatures down a couple degrees ... which may help overall fire activity. Unfortunately, this smoke may impede air operations on the fire," according to InciWeb.
Oregon Gov. Kate Brown told CNN's Jake Tapper Sunday morning that the state is getting federal support from the Biden administration to help fight the Bootleg Fire, but future fire prevention is key.


"It's incredibly important with climate change that we get into these forests and start doing the fitting and harvest and prescriptive burning, so that we can create healthier landscapes that are more resilient, for wildfire," Brown said.
Brown signed legislation this past week that would arm the state with tools and resources to make communities "more adaptive" to wildfires.
The legislation includes resources for adequate firefighting tools and prescriptive and mitigation efforts. Brown also recently signed the 100% clean energy bill, which she described as "the most aggressive clean energy bill in the country."
Meanwhile, extreme fire behavior from the Bootleg Fire helped create a tornado last weekend, according to a post on the Bootleg Fire Info Facebook page Saturday.
The July 18 tornado was confirmed with the Medford National Weather Service Forecast Office, the post said.
1.5 million acres scorched across US
Crews are battling 86 large wildfires throughout the US, with six new large fires reported Saturday, the NIFC said.
More than 22,000 firefighters and support personnel have been deployed to tackle the fires, which have collectively burned nearly 1.5 million acres, the agency said. Most of the fires are spread across Western states, where extreme drought conditions have been reported.
Idaho is the state with the biggest number of large fires with 23. However, Oregon has the most acres burned with 541,336 from its seven large fires. 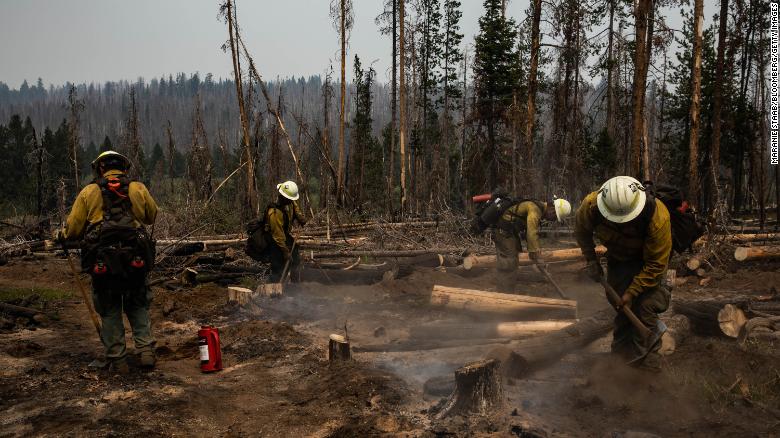 A firefighter crew from New Mexico mops up small fires in the mountains west of Paisley, Oregon, on Friday, July 23, 2021.
The climate crisis is making deadlier and more destructive wildfires the new normal, devastating homes, forcing thousands to evacuate and even destroying trees intended to offset carbon emissions.
Hundreds more fires are burning in the Canadian province of British Columbia, where a state of emergency was declared July 20.
One hundred firefighters from Mexico arrived in British Columbia Saturday to help combat the wildfires burning in the region, Minister of Public Safety and Solicitor General of British Columbia Mike Farnworth said during a news conference welcoming the crews.
Over the next 30 days, Mexican firefighters will work alongside wildfire service crews and firefighters in British Columbia to battle the 275 forest fires burning in the area, Farnworth said.
"The crews here from Mexico are top rate, incredibly skilled ... We cannot thank the Mexican government enough for assisting us," Farnworth added.

The rapid spread of the Bootleg Fire put more than 2,000 people in the surrounding area under some form of evacuation orders as the fire has grown to become Oregon's third-largest since 1900.
"It's kind of a dubious honor," Oregon Department of Forestry spokesperson Marcus Kauffman said Thursday of the fire that was started July 6 by lighting. 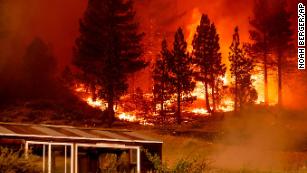 Meanwhile, the Tamarack Fire along the California-Nevada border has destroyed more than 66,744 acres as of Saturday and at least 10 structures in those states.
Additional evacuations were announced Friday, bringing the total to 2,439 evacuees, according to InciWeb.
Nevada on Thursday received a grant from the Federal Emergency Management Agency (FEMA) to fight the fire after requesting assistance earlier that day.
"At the time of the request, the fire threatened approximately 800 homes in and around Holbrook Junction," FEMA said Friday in a news release. "The fire also threatened a water treatment plant, power distribution lines and substations, cellular communications towers, and U.S. Highway 395."

In California, where nine large fires are currently active, Gov. Gavin Newsom on Friday declared a state of emergency in four northern California counties due to the hasty spread of flames.
Butte and Lassen counties are under states of emergency prompted by the state's largest fire, the Dixie Fire, the governor said in a news release. The Dixie and Fly fires have pushed officials to put Plumas County under the emergency declaration as well as Alpine County due to the Tamarack Fire.
The Tamarack Fire also prompted Nevada Gov. Steve Sisolak to put Douglas County under an emergency declaration Friday.
"Now, more than ever we must stand united and use all our available resources to combat this growing threat in order to help our fellow Nevadans receive the aid they need," Sisolak said in a news release.
A state of emergency allows officials to access more funds and resources.