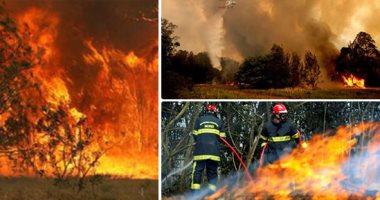 Dustin Gardiner
San Francisco Chronicle
Lashed by strong winds, the Dixie Fire jumped to 434,813 acres in Plumas and Butte counties on Friday, making it the third largest wildfire in state history.
Firefighters had foreseen the explosive growth, fueled by hot, dry conditions and shifts in wind direction. The blaze charred more than 71,000 acres on Thursday night, surpassing the LNU and SCU complexes of last August. By Friday evening, the fire’s containment fell to 21% — down from 35% containment from Friday morning — due to better mapping, said Rick Carhart, a spokesperson with Cal Fire for the Dixie Fire.

“Once we got in there and were able to do some better mapping, we found… there is a whole lot more un-contained line out there,” Carhart said, pointing to “massive fire growth” that occurred on Thursday.

California residents are bracing for another ruthless, record-setting wildfire season, fueled by extreme weather conditions, severe drought, and the encroachment of development — and with it, Pacific Gas and Electric Co. power lines — into the wilderness.

Authorities have not identified a cause of the Dixie Fire and say it is still under investigation. However, PG&E. filed a report indicating that it may be involved in the smaller Fly Fire, which burned 4,000 acres in the Sierra Nevada before merging with the Dixie Fire. According to the report, a tree may have fallen on a PG&E power line.

Regardless of what sparked the fire, winds and a tinder-dry landscape allowed it to spread quickly, destroying homes and smothering mountain towns in thick, acrid smoke.

A thick haze suffused the Sierra skies on Friday, as the sun shone red. Residents who evacuated the burned area struggled to fathom how it had forever altered their lives. Ninety one buildings were ruined, with another five damaged, and the fire leveled the historic Gold Rush Town of Greenville on Wednesday.

Some wondered whether it would be possible to rebuild.

Juvenal Garcia, who fled Greenville hours before flames consumed the historic town, stood Friday morning outside a Red Cross shelter in Quincy, about 15 miles from the fire’s edge.

The 71-year-old retired quarry worker lost everything, including his home and the restaurant, Jose’s Tacos, that he helped his son open before the pandemic. Garcia said he watched videos showing the restaurant in ashes.

“We just started, we had it for two years” he said, holding back tears under the brim of a baseball cap. “I don’t know what’s going to be next. It could be a ghost town in the future. I don’t know.”

Persistent high winds could make it difficult to control the blaze, though forecasters expect the weather to be less dry. Firefighters on the fire’s east side are working to protect resources, critical infrastructure and private property in the path of possible future fire growth near State Route 44 in Plumas County.

There have been no fatalities or injuries, but the wildfire has leveled 91 buildings and 43 minor structures and damaged ten more.

The devastation is unmistakable — Wednesday night, the fast-moving blaze engulfed the Plumas county Gold Rush town of Greenville, all but ravaging the community of 2,100 residents. The following day officials closed Lassen Volcanic National Park as the fire rampaged northward, igniting forest on the park’s east side.

In Crescent Mills, volunteers with the local Fire Department said they felt temporary relief Friday afternoon. The night before, heavy winds sent the fire barreling toward town from the west.

A steady procession of fire trucks and water tankers rolled down Highway 89 through the town, amid smoke and ash, which gathered on windshields and the hoods of cars. Firefighters and emergency workers gathered around tables at Gigi’s Market, a restaurant along the main drag, as they took a moment to recuperate from the grueling firefight.

Residents, who declined warnings to evacuate, watched as a ridge above town glowed bright orange in the dark.

Lara Wheeler, a volunteer, said she worried few buildings would be left standing as 29-mph wind gusts sent flames soaring high into the air. She slept in her car, stationed in a large parking lot.

“It’s a miracle that we’re here,” she said, as flakes of ash larger than a quarter fell from the sky. “We woke up and felt a huge sigh of relief that town was still standing.”

Wheeler, 48, said residents have banded together to help fire crews save Crescent Mills. She and her boyfriend have spent recent days patrolling town on ATVs, looking for hot spots to extinguish.

Like nearly everyone in this region of the Sierra, Wheeler’s family has faced profound loss in recent days. The fire destroyed her mother’s home in Greenville, which had been in the family since 1906.

She said she’s stayed behind to help prevent the fire from leaving another town in smoldering ruins.

“I just didn’t want the same thing to happen to Crescent Mills that happened to Greenville,” Wheeler said. “I feared for the town.”