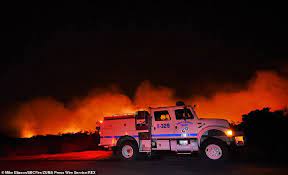 Updates: Find the latest information from the U.S. Forest Service.

More evacuations were issued Tuesday and people have been asked to leave their homes in an area stretching from the mountains to the coast. Get the latest evacuation information from the county.

The Alisal Fire was several miles from the ranch, the Santa Barbara Fire Department said on Twitter. The ranch “has good defensible space, and several U.S. Forest Service engines were arriving to provide structure protection.”

Oct. 12, 11:35 a.m. California Highway Patrol in Santa Barbara reported late Monday morning that Highway 101 remained closed in both directions from Winchester to Highway 1. The recommended alternate routes, Highway 154 and Interstate 5, are backed up with traffic.

Oct. 12, 6:45 a.m. A wildfire that broke out amid high winds in Santa Barbara County on Monday closed a stretch of Highway 101 Monday night and the major freeway remained shut down to traffic in both directions Tuesday morning.

“US 101 is closed to thru traffic at Winchester Canyon Road to SR 1 due to a large fire in the area. Please use I-5 as an alternate route,” the California Highway Patrol’s Santa Barbara unit shared on Twitter. “There is no estimated time for re-opening.”

The Alisal Fire broke out at about 2:30 p.m. Monday in the Santa Ynez Mountains above Alisal Reservoir and was 6,000 acres with no containment Tuesday morning, the Santa Barbara Fire Department said. There are 100 to 120 structures threatened.

Driven by powerful northerly winds, flames tore through dense, dry brush and grass, spreading at a rapid rate, the U.S. Forest Service said. The fire pumped out a massive smoke plume that was visible throughout the Santa Ynez Valley and along the Gaviota Coast.

Burn scars from the 2016 Sherpa Fire and 2019 Real Fire are between the fire and more populated areas.

Winds Monday were blowing at 30 mph to 35 mph with isolated gusts up to 70 mph. Much of Santa Barbara County is under a high wind warning until Tuesday morning with strong winds throughout the area.