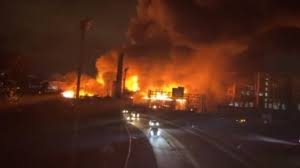 An 11-alarm fire at a chemical plant forced the evacuation of downtown Passaic, N.J., and a warning to New Yorkers that they might smell or see smoke from the gigantic blaze.

The fire erupted around 8 p.m. near the Qualco warehouse next to Route 21 in Passaic, which is about nine air miles from Columbus Circle. Several buildings in the area were reported to be in flames.

“Our firefighters are hitting the fire at every angle,” said City of Passaic Mayor Hector Lora in a Facebook broadcast. “We’re receiving firefighters from all over.”
“Our firefighters are doing everything possible to maintain and contain this fire. It is an extremely difficult fire that continues to rage over this city,” Lora said.
Around 10:20 p.m., New Jersey Gov. Phil Murphy urged people living near the scene to stay indoors. The fire scene is near an area where the Passaic River separates Passaic and Bergen counties.
When Murphy issued the warning, the flames had not reached the Qualco plant’s chemical storage area, reports said.
Qualco specializes in marketing swimming pool chemicals. Its products include chlorine, which can be toxic to humans.
“We need you to stay away from the area,” Lora warned Passaic residents.
As of 10:30 p.m., no injuries had been reported, Lora said.
“We won’t be able to fully inspect [the scene] until fire is completely put out,” Lora wrote on his Facebook account. “It may take some time to establish cause. Main issue with chlorine fire is wind.”
©2022 New York Daily News. Visit nydailynews.com. Distributed by Tribune Content Agency, LLC.