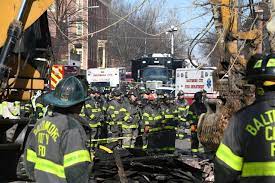 Emily Opilo and Christine Condon
Baltimore Sun
BALTIMORE — Three Baltimore firefighters were killed and a fourth remains on life support after being trapped in a blaze inside a vacant home Monday that is one of the deadliest in the city’s history.
The firefighters were inside a rowhouse in the city’s New Southwest/Mount Clare neighborhood when it partially collapsed.
Two firefighters were pronounced dead at University of Maryland Shock Trauma Center. Another firefighter was pronounced dead at the scene. They were identified as Lt. Paul Butrim, firefighter/paramedic Kelsey Sadler and EMT/firefighter Kenny Lacayo. EMT/firefighter John McMaster remains in the hospital. The four have served a collective 44 years with the department.

Baltimore City firefighters at the scene of a two-alarm fire in the 200 block of South Stricker Street in Baltimore on Monday, Jan. 24, 2022. (Jerry Jackson/The Baltimore Sun/TNS)
“Baltimore owes them the deepest gratitude and respect,” Mayor Brandon Scott said in a statement released late Monday afternoon.
“This is a gut-wrenching tragedy for our city, the Baltimore City Fire Department, and most importantly the families of our firefighters,” Scott said. “There are no words to describe the pain and the severity of the losses we have suffered today.”
Fire Chief Niles Ford, visibly emotional as he addressed media in front of Shock Trauma, called the lost and injured department members his family.
“From this moment, we will honor those that lost their lives today for their bravery and courage,” he said. 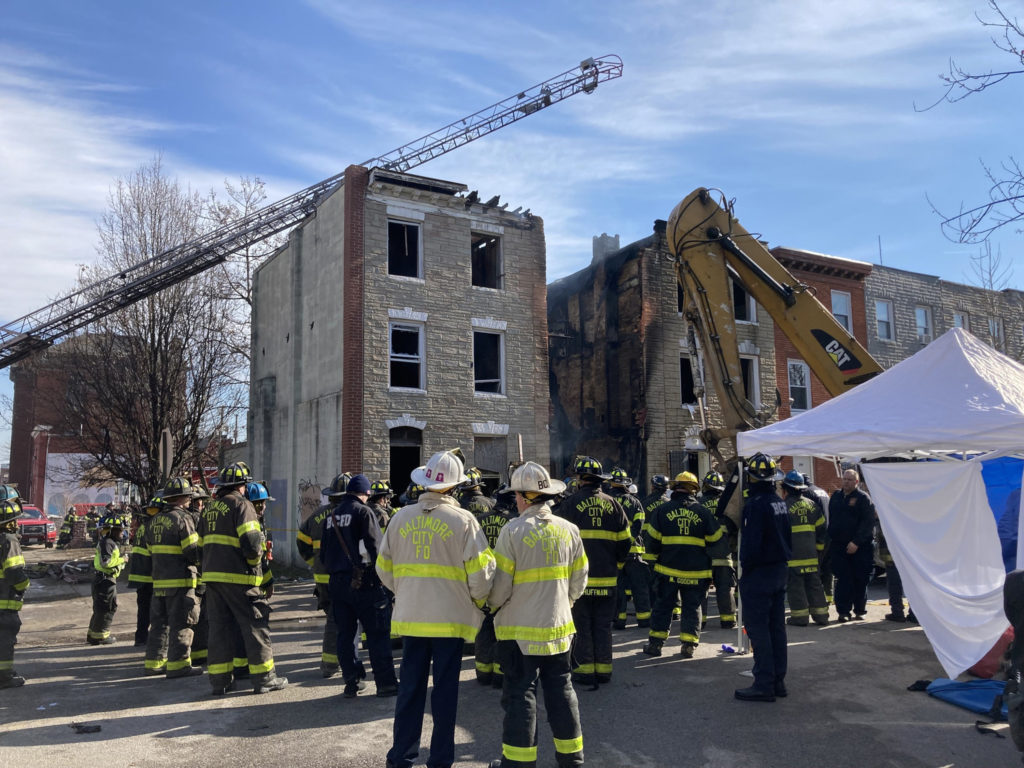 Baltimore City firefighters on the scene of a three-story vacant rowhouse fire in the 200 block of South Stricker Street in Baltimore on Monday, Jan. 24, 2022. (Barbara Haddock Taylor/The Baltimore Sun/TNS)
Firefighters were called to the scene shortly before 6 a.m. Monday. While firefighters were inside a vacant structure that was the site of another fire in 2015, the building partially collapsed, trapping them inside. One firefighter was rescued immediately. Two others were extracted “within an hour.”
Dr. Thomas Scalea of Maryland Shock Trauma said Sadler and Lacayo suffered cardiac arrests at the fire scene and were unable to be resuscitated.
McMasters remains on life support in the intensive care unit, Scalea said. His injuries have the potential to worsen, Scalea warned, saying staff are “keeping a very, very close eye on him.”
“We pride ourselves on bringing our A-game,” Scalea said. “Sadly, this morning our A-game wasn’t enough.”
Asked why the firefighters made the decision to enter the vacant rowhouse, Ford said an adjacent home was still occupied.
“They made the determination they could control the fire and put it out,” he said. “It’s up to those individuals on the scene to see the circumstances they have, and they did.”
Butrim, a 16-year veteran of the Baltimore City Fire Department who died in the fire, was no stranger to thrusting himself into harm’s way for his job.
In 2015, he rushed into a burning apartment, found a child in a bedroom and brought the child to safety, according to the Firehouse Magazine. Butrim performed CPR on the child alone until more help arrived, the magazine reported, recognizing his “great bravery in the face of dangerous conditions” as one of Firehouse’s honorees for its annual Award of Valor.
Lacayo, a seven-year veteran of the Baltimore force, also was remembered fondly. In a Facebook post, the Wheaton Volunteer Rescue Squad in Montgomery County said he was named their paramedic of the year in 2016 and was deemed a top 10 responder in 2015 and 2016. Lacayo also received a unit citation for helping save a person struck by a car in 2018.
”His exceptional skills as a firefighter and paramedic were matched by his bright smile and his unfailing good nature,” the squad wrote in the post. “He was dearly loved by his fellow WVRS volunteers and will be greatly missed.”
Such a deadly fire is a rarity for Baltimore, which has not lost a firefighter in the line of duty since 2014. That fire, also in a vacant home, claimed the life of Lt. James Bethea, who succumbed to smoke inhalation after a fall. Bethea’s death led to calls for reform after investigators found fire personnel took a “haphazard approach” to ventilating the house where he died.
Vacant properties have caused numerous injuries to city firefighters. Five were injured in a 2001 fire when the third floor of a vacant building collapsed, causing the firefighters to fall as much as 40 feet into the building’s basement.
The death toll of Monday’s fire puts it among some of the deadliest in Baltimore’s history. In 1955, six city firefighters were killed in a blaze that consumed the Tru-Fit clothing store in the 500 block of Baltimore St. The nine-alarm fire injured an additional 20 firefighters and was billed at the time as the “worst catastrophe in the fire department’s history.”
In 1888, seven Baltimore firefighters were killed in an early morning blaze at the corner of Sharp and Lombard streets after they were buried beneath the walls of a three-story building.
The deadliest fire to strike the region in recent decades was a blaze that killed three Baltimore County firefighters in 1984. The men were trapped beneath a collapsed roof while battling a blaze at a Dundalk furniture store.
The Stricker Street property where Monday’s fire began was the scene of another fire that injured three firefighters in 2015. The property owners were issued a vacant building notice in 2010, said Tammy Hawley, spokeswoman for the city’s Department of Housing and Community Development. Each year, vacant property owners must complete a registration, and the owner of the home on Stricker was cited in 2020 for failing to do so. Efforts to reach the owners were unsuccessful Monday afternoon.
The property was last inspected Jan. 4, Hawley said, when an inspector found the front of the home adequately boarded and cleaned.
Vacant properties remain a stubborn problem in Baltimore. There are roughly 16,000 vacant homes in the city, and a few thousand are city-owned. Over the summer, the city began posting QR codes on some of the homes, allowing the public to identify their owners.
At the fire scene Monday morning, Celeste Ireland, 55, said she was lying in bed in her home when she began to see flashes of light. At first, she thought she was dreaming, but then her Shih Tzu began to bark and she arose and walked to her window.
“When I opened the curtain — and my house is right behind it — everything was ablaze,” Ireland said.
Her home is behind the property that caught fire, across an alley, she said.
The homes on fire appeared to be vacant, Ireland said. She saw the family that lived adjacent to the blaze be evacuated, she said.
Then, she heard that firefighters were trapped in the blaze.
“I’m a godly woman, and I just started praying,” she said.
———
(Baltimore Sun reporters McKenna Oxenden and Alex Mann and librarian Paul McCardell contributed to this article.)