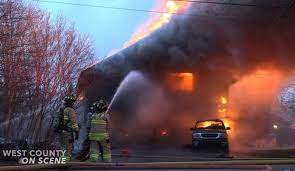 SPRINGBORO — Four people, including three children, and multiple animals were killed in a deadly fire at a Springboro residence on Friday.
Hilda Eberhart, 65, was killed, alongside a 14-year-old boy, a 10-year-old boy and a 6-month-old girl, in the fire, which was reported at around 7:10 p.m. at 118 Union St. According to Crawford County Coroner Scott Schell, the four died of “asphyxiation due to smoke inhalation” based on blood tests which were completed by 5 a.m. Saturday.
The cause and origin of the fire are unknown. According to Springboro Fire Chief Keith Shauberger, the two-story home was “pretty much fully involved” by the time firefighters arrived. A follow-up investigation by Shauberger and Pennsylvania State Police fire marshals done Saturday found no evidence as to what started the blaze.
“It’s just being left as undetermined at this time,” Shauberger said Sunday.
Two other individuals at the home were injured in the blaze. According to Pennsylvania State Police at Meadville, a 45-year-old woman was taken to UPMC Mercy Hospital in Pittsburgh and was in listed in critical condition. Meanwhile, a 63-year-old man was taken to Meadville Medical Center and was listed in stable condition.
Multiple fire departments responded to the blaze, which took until after 1 a.m. to fully extinguish, Shauberger said. Springboro Volunteer Fire Department was assisted by the Conneautville, Albion, Hayfield, Linesville, Summit, Conneaut Lake, Cranesville, Springfield and Edinboro fire departments.
While the firefighters were able to douse the flames, the residence was destroyed in the inferno.
“It’s a complete loss,” Shauberger said. “We had partial structural collapse and everything else during the fire.”
In addition to the fire departments, Conneaut Lake Ambulance, Meadville Ambulance, Central Erie County Paramedic Association, State Police, Penelec and Schell were on scene of the blaze.
Several dogs and cats were also killed in the fire, Shauberger said.
According to Schell, Eberhart was found in a first-story bedroom, while the three children were in a second-story bedroom. All four bodies remained in his custody as of Sunday and have not yet been released to a funeral home.
Shauberger was unsure whether the home was insured for the damages. No foul play is suspected in the fire.
Springboro firefighters had to return to the scene of the blaze on Saturday to put out a minor rekindling of the debris.
(c)2022 The Meadville Tribune (Meadville, Pa.)
Visit The Meadville Tribune (Meadville, Pa.) at meadvilletribune.com
Distributed by Tribune Content Agency, LLC.