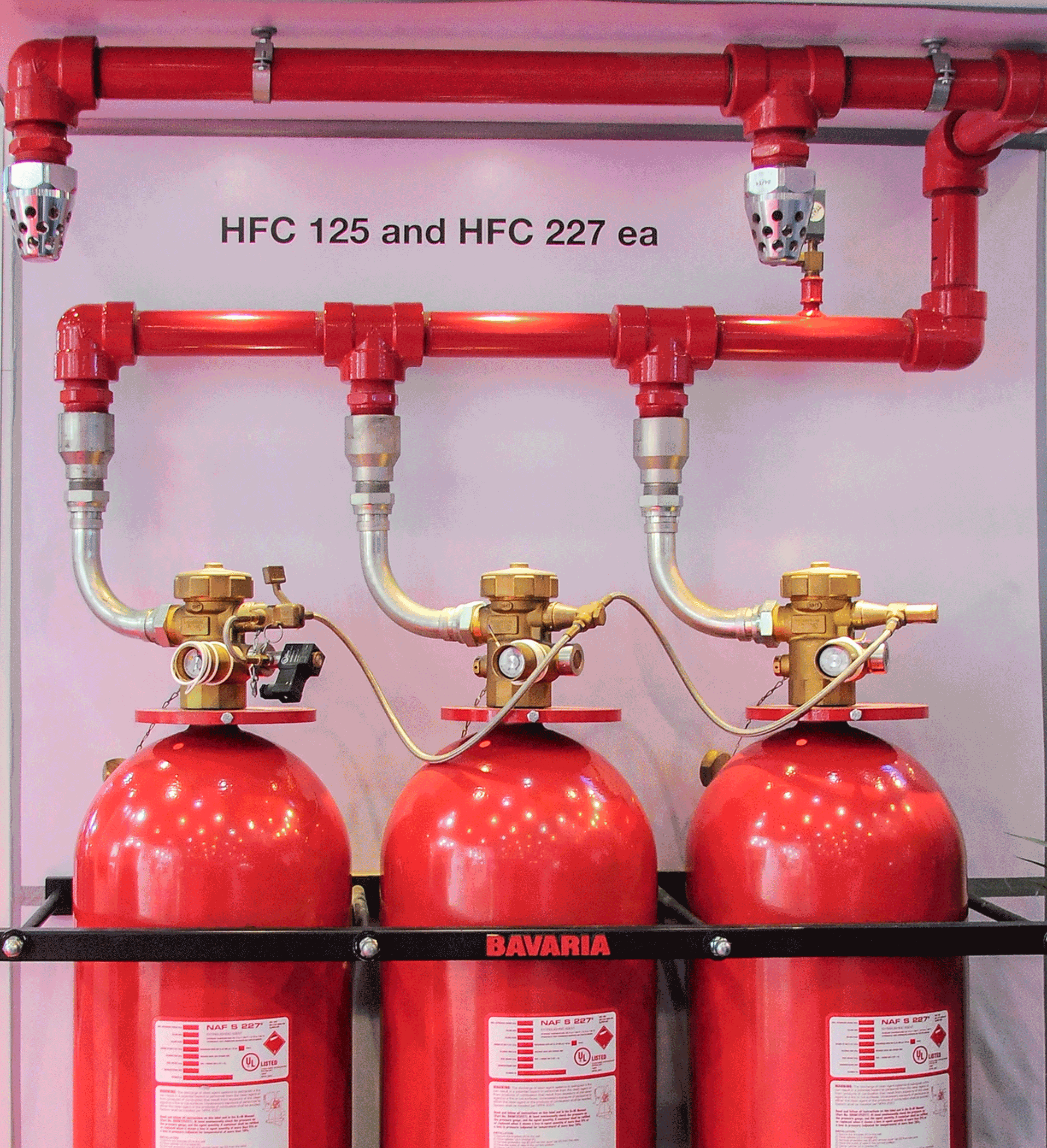 Clean fire extinguishing agents include halon, halon replacements and inert gases. These gases are used in total flooding extinguishing systems to avoid lethal conditions for occupants given that the proper design and installation of such systems. The primary distinction between carbon dioxide and clean agents is the toxicity of the gas. Carbon dioxide extinguishing concentrations exceed its fatal limits while clean agents extinguishing concentrations are below their toxic thresholds. Halons have been identified as stratospheric ozone-depleting substances. As consequence of application of Montreal Protocol on Substances that Deplete Stratospheric Ozone, production of halons was ceased in developed countries by 1994. It's currently being phased out in the last developing country that produces halons. Despite these facts, many halons systems remain in use worldwide. Recycled halons serve as source of supply for mobile military equipment, aviation application and explosion prevention application that remain dependent on halons. Currently, the transition to other forms of halon replacements is well underway. NFPA12A, Standard for Halon 1301 Fire Extinguishing Systems and NFPA2001, Standard on Clean Agent Fire Extinguishing Systems are published by the National Fire Protection Association (NFPA) to address halon, halon replacements and inert gases application in fixed systems. Clean fire suppression agents are defined as fire extinguishants that vaporize readily and leave no residue. Clean agent halon replacements fall into two categories:
Halocarbon clean agents share several common attributes as follows:

Clean agents extinguish fires by a combination of chemical and physical mechanisms, depending on the compound. Halons suppress fires chemically by scavenging flame radicals, thereby interrupting the chemical chain reaction. Other halocarbon compounds suppress fires primarily by extracting heat from the flame reaction zone, reducing the flame temperature below that which is necessary to maintain sufficiently high reaction rates by a combination of heat vaporization, heat capacity and the energy absorbed by the decomposition of the clean agent. Inert gas agents suppress flame by reducing the flame temperature below the threshold necessary to maintain combustion reactions. This is done by reducing the oxygen concentration and by raising the heat capacity of the atmosphere supporting the flame.

The minimum extinguishing concentrations of total flooding systems for class A fires are determined as part of third-party approval process. Class B fires extinguishing concentrations are determined by the cup burner method. Total flooding systems are also used for explosion inerting. The inerting concentration is that required to prevent an acceptable pressure increase in a premixed fuel / air / agent mixture subjected to ignition source. Such systems employ rapid delivery of agent following very early detection of an ignition.  These systems must be specifically designed for each application as there are no generic design requirements or standards available.

One of the main concerns when it comes to the use of clean agents in fire protection is the agent toxicity. Toxicology tests are performed based on:
The No Observed Adverse Effect Level (NOAEL) and the Lowest Observed Adverse Effect Level (LOAEL) for each agent are obtained among these tests. The NOAEL is the highest concentration of an agent at which no adverse effect occurred while the LOAEL is the lowest concentration of an agent at which an adverse effect was measured. The use of halocarbon clean agents in occupied area is generally subjected to the constraint that the design concentration must be less than NOAEL. On the contrary, inert gases are physiologically inert. Their primarily physiological problem is the reduced oxygen concentration caused by the high agent design concentration. Inert gases can be used in concentrations up to 43% in normally occupied areas (a residual
oxygen concentration of 12%).

There are two main environmental impacts need to be considered with halocarbon clean agents
The ODP (Ozone depletion Potential) is used to address ozone depletion impacts of a halocarbon agent. It is a measure for the relative amount of ozone destroyed as compared with an arbitrary standard. The atmospheric life time is used also to address environmental impacts not on base of an identified harmful effects but on the base of the current uncertainty if there are harmful effects or not. The GWP (Global Warming Potential) is used to address global warming. The GWP is the cumulative amount of radiative forcing between the present and some future time caused by a unit mass (weight) of a compound, as compared with the same unit mass (weight) of an arbitrary standard. The radiative forcing is defined as anything that will cause the energy balance at the top of the troposphere to no longer be in balance. All chemicals with a non-zero ODP is subjected to phase out under Montreal Protocol. HFCs and PFCs are part of the basket of industrial gases included in Kyoto Protocol and may be subjected to emission controls in signatory nations, however they present less than 1% of greenhouse gas emission on a carbon equivalency basis which are used as fire extinguishants.
Clean agent systems methods of application are:

Total flooding clean agents’ advantages are:
These systems discharge extinguishing agent in such a manner that the burning object is surrounded locally by a high concentration of agent to extinguish the fire.
All previously discussed systems and components are provided by Bavaria to satisfy the customers' needs. Please check our products technical datasheets for more information or contact us. 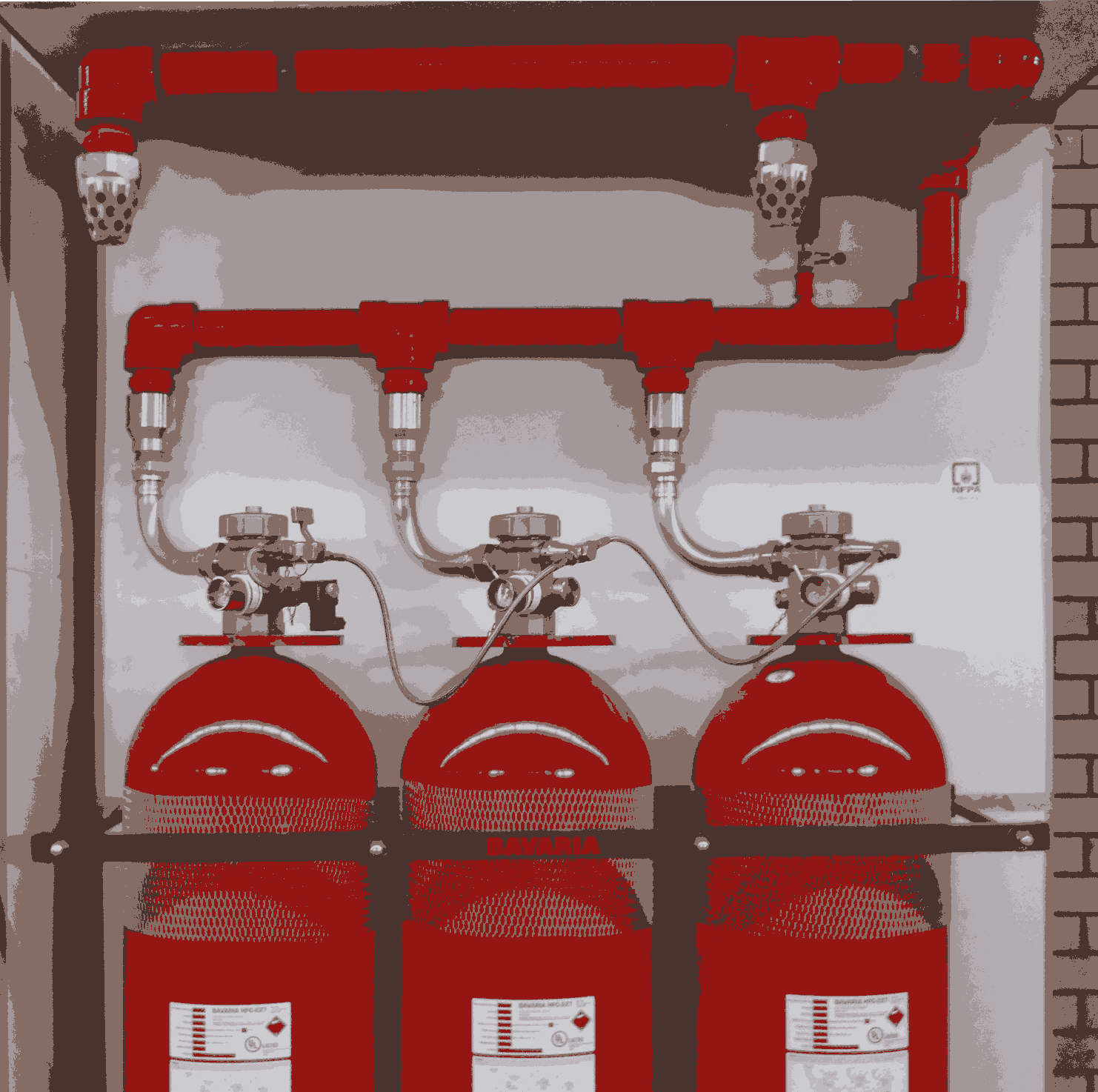